What Is Solitary Confinement?

What is solitary confinement like in today’s prisons? Sure, countless Hollywood movies have given us an image of life in the hole but are they even close to the reality? Keep reading for an introduction to what you can expect if you ever end up in solitary confinement.

What Is Solitary Confinement

Solitary confinement is a type of prison housing that consists of accommodating an inmate in a single cell with next to no interaction with other inmates. Although it typically targets dangerous inmates, some vulnerable prisoners also find themselves in isolation. The approximately eighty-thousand solitary confinement inmates in the United States spend nearly twenty-four hours a day alone in their cell and are allowed very little interaction with prison staff and outside family and friends.

Spending so much time without human contact has psychological repercussions. Mental health problems such as panic disorders, depression, and PTSD are examples of the types of illnesses that arise when a person doesn’t have contact with other people for some time. The American Psychological Association (APA) says that the devastating effects can last years, and even a lifetime, after the individual rejoins the general prison population. 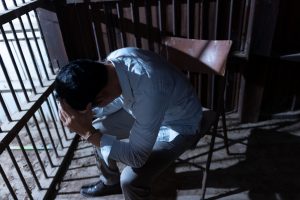 Did you know that there isn’t a cap to how long an inmate can stay in confinement in many parts of the country? Pennsylvania prisoners on death row, for example, live in a permanent state of solitary confinement while they are in prison. The ACLU notes that this policy leads to terribly extended stays in isolation, with one death row inmate in confinement for more than thirty-five years.

You’re not alone if you want to reform, and even end, the use of this confinement in our nation’s prisons. Advocates of prison reform have successfully convinced legislatures throughout the United States to pass new legislation to control the use of isolation within correctional facilities.

You can join the effort to abolish this confinement. Check out the ACLU’s “Stop Solitary: Resources For Advocates Updated January 2019” for extensive information that will prepare you to join the fight against barbaric prison practices.

Lastly, now when people ask you, “what is solitary confinement?” you’ll know enough to start a conversation. If the idea of putting someone into a tiny cell with no visual contact with another human being for vast lengths of time bothers you, we encourage you to get involved in prison reform efforts in your community.

Remember to keep Gibson Bail Bonds on speed dial for help in getting out of jail.