Is Vandalism Considered a Felony in Pennsylvania?

It doesn’t take too many harmless pranks to learn whether or not vandalism is considered a felony. While it seemed like good fun in the moment, Pennsylvania judges will think otherwise. While there are different levels of charges with vandalism, you could very well be facing a felony charge.

One of the first laws people break are charges related to vandalism. Continue reading for more information about this topic. Gibson Bail Bonds wants to help you before you find yourself in trouble.

In Pennsylvania, is Vandalism Considered a Felony?

If you perform a spray paint tag, it’s likely criminal mischief. If you create Home Alone style traps, you likely will receive harsher charges. As with many minor crimes, the law looks to the intent and severity of actions. What might look like a joke to you could have dire consequences.

Let’s say you added peanut butter to your friend’s snack, not knowing they were allergic. If they end up dying, criminal mischief soon becomes full-blown homicide. In the age of YouTube, pranks seem to go wrong much more frequently. Think twice before vandalism becomes a severe charge against you.

What Does the Law See as “Vandalism”? 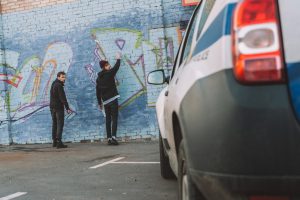 The overarching description of vandalism is any intentional damage to property, private or public. That could range from spray paint graffiti to physical damage to a storefront. Vandalism can also soon develop into harsher crimes based on the situation. Defacing, recklessness, negligence, and destruction of property are all possible crimes that can be added.

You likely won’t face jail time for toilet papering the neighbors house, but if you whack their mailbox with a baseball bat, you may get arrested. Finally, Institutional Vandalism targets schools and worship centers, which does include steeper charges. You may even face hate crimes depending on the damage committed.

What is Agricultural Vandalism in Pennsylvania?

No, the ears of corn aren’t pulling tricks on the tomatoes again. This time, it’s two teens racing cars through nearby farmland. Or perhaps for 15 minutes of fame, someone creates a crop circle on someone’s farm. Since it’s not their land, they could face trespassing and vandalism charges.

While it may seem like just plants at first, agriculture plays a significant economic role. Damaging even one plot of their crops could have lasting repercussions to the community at large. There is also the economic loss of the farm, as well as injury liability. Should someone crash their car on their farm, they could become responsible.

How is Vandalism Tried in Pennsylvania?

The severity of your vandalism charges depends on the property damage cost you caused. You may see fines of hundreds to several thousand dollars, as well as prison time. Criminal mischief often carries fines of $250 and 90 days in jail. Property damages over $500 cause your fines to reach $2,500. Misdemeanors could mean thousands in fines, plus two years behind bars. Should it reach felony status, you could see seven years and pay $15,000.

The best pranks are those not pulled in public. Think twice before damaging property. If you are arrested while being criminally mischievous, call Gibson Bail Bonds 24-hours a day for bail bond agents.