Is It Illegal to Live in Your Car in Pennsylvania?

Coast to coast, more people than ever have found it challenging to locate affordable housing. Unfortunately, many are left to wonder, is it illegal to live in your car?

While a heartbreaking situation, many people find themselves accidentally breaking the law in Pennsylvania. Keep reading on to learn more with Gibson Bail Bonds, your 24-hour bail bond agents.

In Pennsylvania, is it Illegal to Live in Your Car?

Many communities have come under fire for policies that seem to punish the poor. One example are laws that make it illegal to live in your car. There are two primary exceptions, although others likely exist as well. Having an RV or trailer at a campground is allowed because they require rent.

On the other hand, let’s say you get sleepy while driving for long periods. While you can grab a nap at a rest area, officers will likely question you. Another gray area is when truck drivers frequently pull over for sleep. If you find yourself in either one of these situations, you should only do so in designated areas.

Why is Sleeping in Your Car Against the Law?

While it isn’t explicitly illegal to sleep in your car, trespassing is. Once a store closes for the day, parking in the lot isn’t permitted. Even a 24-hour retail store will have signs posted to prevent overnight sleepers. While you might get a few minutes of shut eye, they usually have security guards roaming that will confront you.

Another way that prevents drivers from sleeping on their premises are loitering charges. Even though it’s a controversial practice, loitering remains a relatively accepted vagrancy law. Even though it would seem safer, sleeping off drugs or alcohol may also become DUIs. Law enforcement considers being in a vehicle under the influence as enough to arrest you.

The Rise of Stealth Camping 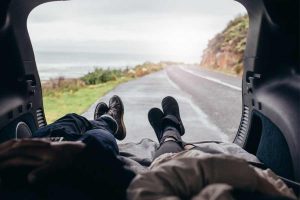 In an odd turn of events, stealth camping has seen a rise in popularity. Simply put, stealth camping is staying overnight where one shouldn’t be staying. The term is used to describe merely setting up an impromptu camp away from others. Thanks to social media, there is a renewed fascination with questionable overnight parking techniques.

Stealth campers can stop anywhere from highway medians to residential neighborhoods. It can also happen with a stick-built camping enclosure to moving vans with blacked-out windows. While it would likely get you into some degree of trouble, some find it necessary. That’s especially true in areas where there aren’t any lodging options for drivers.

Why is it Illegal to Sleep in Your Car?

Although many of these laws are outdated, the Occupy political movement renewed interest in them. Many municipalities enforce such policies to prevent city-wide shutdowns by protestors.

There are about 50 Pennsylvania communities that outlaw sleeping in public. Unfortunately, most homeless shelters remain overcrowded, underfunded, and have too many barriers for occupants.

You may face a variety of charges depending on the situation and location. If you get arrested for sleeping in your car, contact Gibson Bail Bonds.