What is Breaking and Entering?

If you find yourself in handcuffs and the police officer says to you that you are under arrest for breaking and entering, what exactly does that entail?

Understanding the basics of what this accusation means is the first step in fighting for your freedom. Keep reading to learn more about the crime of breaking and entering, and what’s involved with the charge in Pennsylvania.

What is Breaking and Entering: The Basics

At its heart, a break and enter accusation means that you used some level of force to enter a building without permission. Interestingly enough, how much force you used to get into the building doesn’t matter when it comes to charging you with it. The level of power can range from such acts as breaking down the door to pushing open a window screen to gain entry.

Most of us associate a break and enter criminal complaint with burglary. Yes, you could end up with a burglary charge if you broke into a building planning to commit another crime. For example, if you smash in a door to steal a homeowner’s computer, the entering through force charge would become part of the higher burglary accusation. 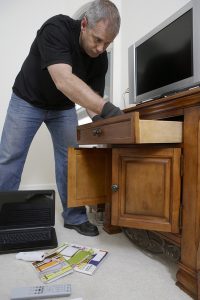 However, if you didn’t break into a house to commit another crime, you might be guilty of trespass rather than burglary. As you can imagine, a burglary charge is a more severe offense than an unlawful intrusion. When determining whether to charge you with burglary or trespass, authorities will examine whether you intended to commit another illegal act when you made entry into the building.

It’s essential to keep in mind that burglary doesn’t have to involve a break and enter. The mere action of the unauthorized entrance into a building with a plan to commit another crime constitutes burglary.

You could be in substantial legal danger if you end up facing a burglary charge. Pennsylvania law classifies burglary as a felony. Unlike the much less severe misdemeanor of simple trespass, a felony conviction could send you to prison.

It might seem like there isn’t much chance of defending yourself against a break and entering charge. However, a defense attorney can argue that you had permission to enter the premises or that you mistakenly entered. Depending on the exact details of the case, you might have a strong argument that can result in your acquittal.

If your potentially unlawful behavior leads to criminal charges, contact Gibson Bail Bonds as soon as you know the details of your bail terms. You won’t want to spend any more time than necessary in a Harrisburg, PA area jail. Once you’re out on bond, you can work with your attorney to show that you didn’t forcibly enter a building without permission.

In Pennsylvania, a person has the right to feel safe from harm in their home. Under the Castle Doctrine, a homeowner has the right to use force against an intruder if they believe that they are in danger. For example, if you kick down a door in the middle of the night, it’s plausible to think that a homeowner might shoot you in response.

The Castle Doctrine, however, doesn’t allow a homeowner to shoot only to protect their property. Instead, the law will assume that the owner feels as if they are in danger unless there is alternative evidence. It’s smart to expect forcefully entering a structure without permission could lead to your death.

Don’t confuse a Castle Doctrine with the so-called Stand Your Ground laws. The latter gives an individual who feels in mortal danger in a public place the right to shoot. Pennsylvania’s Castle Doctrine only applies to situations that occur in your home, business, and car.

Breaking and entering in Pennsylvania can lead to a trespass or burglary charge in some circumstances. You could be up against a burglary complaint if you go into a home or business intending to commit another crime. Mainly, the nature of the criminal charge that would be appropriate in a case stems from the intent behind the action.

You can rely on the professionals at Gibson Bail Bonds to help get you out of jail in the Harrisburg, PA metropolitan area. Contact us today for expert and timely bail bond assistance.