What is a Police Lineup?

Many people are unclear about what is a police lineup. It would help if you had the facts when Harrisburg, PA police ask you to participate in this crucial law enforcement step. Read on for everything that you need to know before you put yourself on display.

Basics of an In-Person Police Lineup

Are you a fan of any of the television crime dramas like Blue Bloods and Law & Order? If so, you’ve undoubtedly seen countless instances where the police use an in-person police lineup to solve a crime. Primarily, it involves having the victim look at an in-person row of people that includes the suspect to see if the victim can identify the suspect.

The victim doesn’t interact with the suspect during the lineup. The victim typically stands with a law enforcement officer behind a one-way sheet of glass. This type of investigative procedure aims to include and eliminate a person suspected of committing a specific crime.

As a suspect, you won’t have to participate in a so-called perp lineup without your criminal defense attorney’s presence. Your attorney will safeguard your rights throughout the proceeding. If it leads to your arrest, your lawyer can use any potential problems with the process to argue in your favor.

Many times, law enforcement will perform a police lineup without the presence of the suspect. Let’s look at how a photo lineup differs from an in-person lineup. 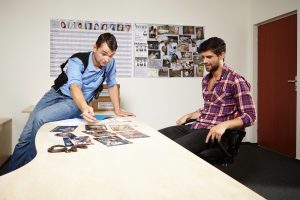 Photographic lineups, sometimes called photo arrays, are useful for the police because they don’t need to involve your attorney. The Sixth Amendment criminal defendant protections require law enforcement to bring in your attorney if you are physically in the lineup. Thus, a photo array is a much more informal way of helping the police hone in on a suspect.

The police will show a victim your photograph among a selection of other pictures to see if the victim will point you out. Law enforcement must follow a bunch of rules to ensure that they aren’t leading the victim into identifying a specific individual.

Regardless of whether a victim identifies you through an in-person police lineup or a photo array, you should expect your arrest to follow. Of course, an identification only begins your criminal case, and many things take place before a possible conviction. Gibson Bail Bonds stands ready to help arrange your bail if you do end up under arrest.

Problem With Relying on an Eyewitness or a Victim

In a perfect world, every police lineup would lead to the arrest of the right person. Unfortunately, that’s not the case in today’s world. The Innocence Project suggests that more than seventy percent of eyewitness identifications are wrong.

Some of the reasons that a police lineups fail to finger the actual offender include:

A trustworthy police lineup depends, to a large extent, on how the police instruct the witness. The American Bar Association points to research showing that a witness is less likely to make an identification when assured that:

Fortunately, there are ways to ensure a higher level of correct suspect identifications. It also depends on the willingness of law enforcement to follow a rigorous set of procedures. Read this article from the American Psychology-Law Society for more information on the research into improving this all-important investigative technique.

The police lineup is an integral part of many criminal cases. A positive suspect identification makes it highly likely that an arrest will occur. Remember that identification as the suspect isn’t the final word on your guilt, and what happens afterward is crucial to your future.

Contact us today at Gibson Bail Bonds when you need to bond out of jail anywhere in the Harrisburg, PA metropolitan area.