How Long Do You Stay In Jail If You Can’t Make Bail?

If you’ve ever watched a courtroom drama, then you have seen the bail process in action. When the police arrest someone accused of a crime, there is usually a bail amount put in place. So how long do you stay in jail if you can’t make bail? The answer will depend on several sets of circumstances.

Being placed under arrest is intimidating and scary. If you need help making bail so that you can get home to your family, call the professionals at Gibson Bail Bonds. Our agents use a simple process to get you out of jail and back to the freedom you deserve until your trial begins. We’re here to help.

When an arrest happens, the bail is what that person must pay to get out of jail. It is the amount you pay to show good faith that you will show up at your hearing. Bail looks different depending on the scenario. Some possibilities include:

Bail Set by the Judge

In most cases, the judge sets the bail amount at the defendant’s arraignment. Judges often use a fixed schedule to determine the fees. These amounts come from algorithms that help the judicial system guess how big of a risk someone is. The judge will take into account the following:

In some areas, the police may use this same algorithm to set bail at the station. This plan avoids you having to spend a night or two in jail waiting for arraignment.

Released on Own Recognizance

Sometimes the judge feels the risk of a defendant failing to show up is almost nonexistent. If this is the case, they will not set a bail amount. Instead, the defendant will have to sign a document in which they promise to follow certain restrictions and guidelines. Then they are free to go until the trial begins. A release on your own recognizance (ROR) is most common for non-violent misdemeanors. 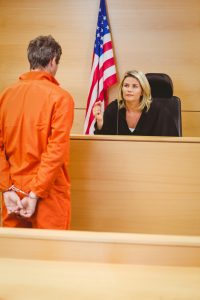 In some extreme cases, the judge may refuse to offer a bail option. This is most likely to occur in violent felony crimes. If the judge feels the defendant is a flight risk or would harm others while in the community, they may refuse bail. This situation could also happen if there are other warrants out for the person’s arrest.

How Long Do You Stay in Jail If You Can’t Make Bail?

If you are not able to make the bail set for you, you must remain in jail. The duration will vary from case to case, depending on the court’s schedule. The Constitution requires a speedy trial, but that is a highly subjective phrase. The reality is that things could drag on for a long time.

Your initial arraignment typically happens within 72 hours. But after that, it could be weeks or months or even longer before your trial concludes. Felony cases tend to take longer than misdemeanors.

If you cannot make bail, you will be in jail, at least until your trial concludes. If you receive an acquittal, then you will be free to go. If you get a conviction, then you will have to see what sentence the judge hands down. It could very likely include more jail time.

Get Out of Jail Fast

To avoid a lengthy and dangerous time in jail before your trial, reach out to the experts at Gibson Bail Bonds. Our team will help you get out of jail and back home in no time.