Gibson Bail Bonds discusses the penalties and options when you’ve been charged with possession of a controlled substance. We’re here to help when you’re working your way through the Pennsylvania court system.

What is a “Controlled Substance”?

A controlled substance is a drug or medication used for recreation or medicinal purposes, that has a high likelihood of negative side effects or addiction. The Drug Enforcement Administration (DEA) began classifying drugs and pharmaceuticals into scheduled classifications in 1970 when the Controlled Substance Act was launched.

Controlled substances include medications for pain or behavior management but can also include street drugs. A drug can be moved from one schedule to another, added, or removed from the list with a petition from the Department of Human Services (DHS), DEA, or through an interested party petition. Interested parties can include the manufacturing company, local government agencies, public interest groups, and similar organizations. 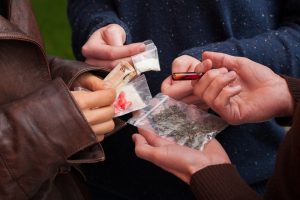 Several factors are considered when scheduling a substance in the system such as:

These have a high potential for abuse and addiction. They currently have no medical use or accepted safety regulations on their use. This classification includes heroin, LSD, marijuana, and similar street drugs.

These drugs or substances have a high likelihood of addiction and abuse. They are considered acceptable in some medical situations but are highly regulated. This classification includes methamphetamines, cocaine, Adderall, Ritalin, methadone, fentanyl, and Dilaudid.

These drugs have documented medical purposes and have a moderate likelihood of addiction and abuse. They include ketamine, testosterone, low codeine mixes (Tylenol with Codeine).

These are drugs with low addiction and abuse histories and are often used for short term medical treatments. They include Xanax, Soma, Darvon, Darvocet, Valium, Ativan, Talwin, Ambien, Tramadol.

These drugs are proven to have a relatively low addiction tendency and can be purchased over the counter. They include anti-diarrheals and cough suppressants.

You can not use addiction as a defense for possession of a controlled substance. Your charges are lower as you pass to lower severity in the schedule. There are some exceptions to the charges, but it is your responsibility to bear the burden of proof. Meaning you have to provide proof to the court that you are not in the wrong.

If you can prove you have a license to carry, distribute, or produce the substance for yourself, or as a caretaker, you can petition to have the charges dropped. If you’ve got a prescription for the drug, you can have the charges dropped or reduced. If you are able to prove that the drugs aren’t yours, or if you were unaware the drugs were on your person, you may have a defense in the case.

If you are arrested for possession of a controlled substance in the state of Pennsylvania, it’s a lot easier to gather proof of innocence, or proof of medical use when you’re not behind bars. Gibson Bail Bonds can work with you and your lawyer to get you out of jail while awaiting trial by posting your bond. Give us a call to discuss how it works.