Can You Smoke In Prison?

Many vices can lead a person to serve time in prison. The irony is that once you have a conviction, you pretty much have to give them all up in confinement. When someone is facing a prison sentence, one of the first questions they have is, “Can you smoke in prison?”

If you are facing a trial and are stuck in jail, reach out to Gibson Bail Bonds for help. Our agents can act quickly to handle your bail and get you out.

So, Can You Smoke in Prison?

The quick and easy legal answer to that question is, “No.” U.S. prisons do not allow tobacco use, according to the stated rules.

The U.S. prison system, including the Federal Bureau of Prisons, banned all forms of tobacco products for inmates. This regulation means that cigarettes, chew, dip, and e-cigarettes are not allowed at any time, indoors or outdoors. 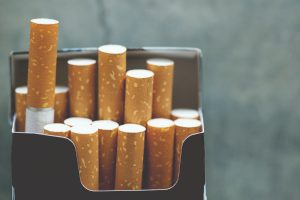 Violators may face a disciplinary incident report and any penalties or repercussions that come with it. That is the official policy. So smokers who are used to having smokes readily available may be in for a tough time.

The legally correct answer is that prisons do not allow tobacco products. The reality of the situation is much different.

You absolutely can get tobacco products in prison if you’re willing to pay the price. In fact, there is a thriving black market for cigarettes in most correctional facilities.

Getting your hands on a whole cigarette will cost between $15 and $20 if you can even find one. In most prisons, the type of smoke that is available is much smaller. Called a ‘pinner,’ it only contains a fraction of the tobacco in a regular cigarette. It often comes rolled in the paper that wraps toilet paper rolls.

These tiny little smokes cost about $5 each. Purchasing a whole pack of real cigarettes will run you $200 to $300. Smoking in prison is not cheap.

How Do Cigarettes Get In the Prisons?

With a clear rule banning tobacco, how and why are so many prisoners still smoking? Capitalism can answer that question. There is a demand, and some people are offering the supply. There is a robust and barely-disguised black market for cigarettes in prisons.

Who does the supplying? The guards. They smuggle in smokes to sell to the prisoners. It may seem like a considerable risk. But clearly, the potential profit makes many prison employees willing to go for it. In one week, a guard could make up to $1500 by selling a pack a day.

As part of the black market, they look the other way when a prisoner smokes. But if an inmate gets on the wrong side of a guard, the consequences could be significant.

Another thing prisoners need to consider is how to light their cigarettes. Lighters and matches are not so easy to come by in incarceration. Inmates usually need to get creative in how to create a flame so that they can smoke their contraband.

When it comes to whether or not you can smoke in prison, you need to consider two questions:

If your answer to those questions is “yes,” then you might decide the risk is worth the smoke. If not, then your lungs might come out of prison in better shape than before.

Some facilities may have other tobacco products available on the black market, too. Occasionally, dip and chew can make an appearance. But in most cases, cigarettes reign supreme. Supply and demand rule the roost, even behind bars.

Waiting for Trial? Gibson Bail Bonds Can Get You Home

If you are waiting for an arraignment, the team at Gibson Bail Bonds is here to help. Give us a call any time, and an agent will be ready to discuss your bail with you.