What is a Suspended Sentence?

Your life may have become complicated when you ended up as a defendant in a criminal case. While discussing your legal options, you may have learned how a suspended sentence could save you from prison time.

Although you’d surely prefer a not guilty verdict in your case, a suspended sentence might be your next best outcome. The terrific thing to know about this legal outcome is that you’ll likely avoid prison time. Following your conviction, your lawyer will ask for a suspended sentence, and the judge can say yes or no to your request.

The timing of your sentencing helps to determine when you’ll learn your fate. Below are the two most common times that a judge can use suspended sentencing in your case:

There is typically a delay between a guilty verdict and the sentencing phase of a trial. A judge can hold off on imposing your sentencing indefinitely. When this occurs, you’ll likely face a series of restrictions and requirements that you must meet to make the suspension of your sentence permanent. 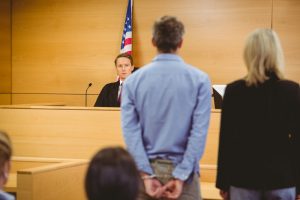 The judge can also opt to suspend your sentence after the terms of the sentence are announced in court. For example, let’s say you receive a sentence of one year in prison for theft. If the crime wasn’t severe and your first conviction, you could be eligible for a suspended sentence.

The court will rule whether to make it conditional or unconditional. A conditional suspension means that you must either follow a set of court-imposed rules or face your sentence’s reinstatement.

Don’t forget that a violation of the court’s restrictions can lead you into a prison cell. It’s sometimes possible to post a bond if you find yourself in jeopardy due to breaking your release condition. Contact us at Gibson Bail Bonds for help in posting bail in the Harrisburg, PA metropolitan area.

An unconditional suspension effectively ends your case without any further action. Although you won’t face the severity of prison time, your criminal conviction remains in place.

Why There so many Suspended Sentences

You’d probably be surprised that your chances of receiving a suspended sentence are high if you’re a first offender of a non-violent crime. There’s no denying that Pennsylvania’s prison system is overcrowded. Judges and prosecutors attempt to ease the crowded penitentiary conditions by agreeing to suspended sentence requests.

Prosecutors often offer a suspended sentence option to encourage a defendant to take a plea bargain. The result is that you won’t face any prison time if you agree to plead guilty. A plea bargain saves everyone involved in your case time and money since your case won’t go to trial.

Although a suspended prison term isn’t the same as probation, the two are similar. As a result, legal changes that impact probation in Pennsylvania are of vital interest. Recent crackdowns on probation breakers should encourage you to stick to any of the terms of your release.

According to the Philadelphia Inquirer, Pennsylvania’s new guidelines for punishing probation violations calls for harsh sentences. Therefore, don’t expect much leniency from a judge if you violate your conditional release. It’s more vital than ever that you listen to your attorney’s advice if you think that you could be about to break your agreement with the court.

You won’t have to spend years behind bars if you receive a suspended sentence. Whether you make a plea deal or are found guilty at trial, a judge can often send you home instead of a prison cell. If you get this dream deal, do everything possible to stick to the agreement’s conditions so you can move on with your life.

Gibson Bail Bonds works extra hard every day, helping our clients throughout the Harrisburg area to be able to post bond. Contact us today for expert, friendly bail bond assistance.