How is My Bail Amount Set? 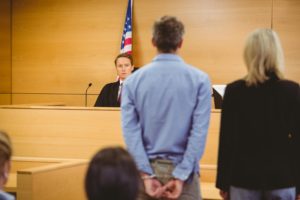 When you receive a bail amount, it may seem arbitrary at first. How does the court system determine what you owe and how are bail amounts determined?

Unfortunately, at your bond hearing, you have multiple factors working against you in creating the set amount. Everything from your criminal history to how long you’ve lived in the community gets considered.

Are You a Threat?

If the judge believes that releasing you might put the community at risk, they will likely set your amount higher than others arrested for the same crime. Or, if they believe you are dangerous, they may deny you bail.

A court may ask that you undergo a mental health evaluation before a bond amount gets set. And if they believe that you potentially are not going to show up to court, they are likely going to keep you until trial.

Depending on the severity of the crime you become suspected of committing, your local police department may have preset bail amounts. Sometimes, they will even allow you to make bail before you meet with a judge.

Bail judges may also use a schedule or guideline to set your bail. Some rely on mathematical algorithms to calculate the total amount. If a crime is severe enough, however, you are likely going to have to go to a hearing.

Are You a Repeat Offender?

If you are experiencing your first run-in with local law enforcement, a judge may provide you with a low bail amount. However, if you have repeatedly been arrested, especially for the same crime or similar violations, you are likely facing a much higher amount.

Many judges see jail as a learning opportunity, and most dislike seeing repeat offenders. If you have shown that getting arrested is not a deterrent to breaking laws, they are going to make it more difficult for you to leave.

One reason why some detainees receive harsher bond amounts than others is their ties to their local community. Those who have been a law-abiding member for years likely get seen as much less of a threat than someone who is merely drifting through town.

It is possible that you have a better chance of receiving affordable bail amounts if one of the following applies to you.

However, if you have multiple misdemeanors or severe crimes on your record, you aren’t going anywhere.

When you need only the best bail bond service in Harrisburg PA handling your bond, give Gibson Bail Bonds a call!